From Fearful to Hopeful: How The Water is Fueling An Aspiring Swimmer's Purpose 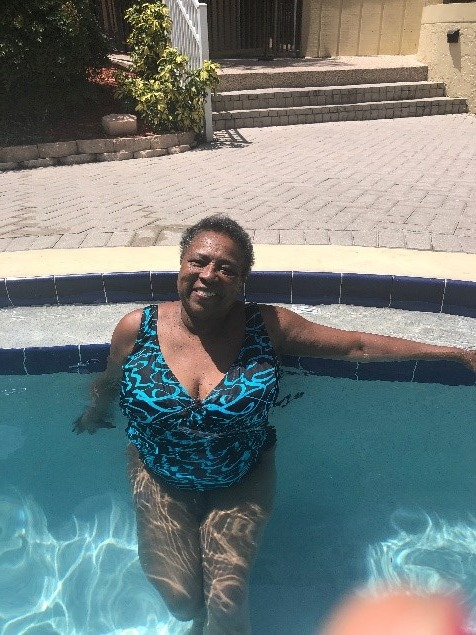 Fear (n) : an unpleasant emotion caused by the belief that someone or something is dangerous, likely to cause pain, or is a threat, whether that belief is real or imagined.

Being tossed in the water as a child, escaping a near-drowning experience, feeling overwhelmed by the depth of the sea—all of these are common reasons that spark fear in would-be swimmers. And these fears sometimes become lifelong hurdles that prevent healthy relationships with the water. Take 73-year-old Peggy Harris’s story.

Peggy was a young girl growing up in a segregated Phoenix City, Alabama in the fifties and sixties, and surviving life in the Jim Crow south was always an uphill battle. “Separate but equal” facilities kept her from fully enjoying the privileges white children were afforded—including access to swimming pools. To compensate, Peggy and her friends would travel together to their sole community park and play around in a nearby dark, murky makeshift pond full of weeds and bugs. The water was deep enough to cover their heads if they went too far, and the young boys would build a dam with bricks to create their own reservoir to swim in.

The children who could swim were self-taught: they learned by courageously jumping in the pond and figuring it out. For fun, they would toss their inexperienced friends inside assuming they, too, would learn how to fend for themselves. But it wasn’t Peggy’s idea of fun. All the horse playing that sometimes resulted in witnessing near drownings birthed a fear in her instead. This fear was so convincing that she discontinued her trips to the park with her friends so that she wouldn’t become the target of the next prank—so convincing that she hasn’t been able to shake it to this day.

“My only chance to enjoy the water was in that pond, but watching children get thrown in and nearly drown frightened me so immensely that I could never bring myself to seize that opportunity. I’ve had a fear of the water since.”

THE COST OF TOUGH TIMES

Perhaps if life for a young black girl like Peggy in Phoenix City was more promising, she and her siblings would have jumped at opportunities to adopt new skills like swimming. However, circumstances in her hometown didn’t make learning easier. There were only two high schools: one for black children and one for white children. Even more deterring, they were only provided with textbooks the white children didn’t need. At home, both of Peggy’s parents were non-swimmers: her mother was never interested, and she lost her father at the age of five without ever learning his history with the water. A widow, her mother’s only priority became to make ends meet and put food on the table. She had no extra income to support any of her children’s hobbies or interests. And even if she had wiggle room to provide for extracurricular activities like swimming, they were either inaccessible, underfunded or substandard for African-American children. These drawbacks coupled with her fear of water were enough for Peggy to promise two things for her own children: they would be educated and they would learn to swim.

“I know my mother would have encouraged me to learn how to swim if she knew I had an interest and if she had the means to support it. I wanted to be able to provide those resources for my own children.”

Still not a swimmer, Peggy married a marine and moved to Columbus, Georgia before bearing her children. In Columbus, things were different: accessibility to recreational resources wasn’t as out-of-reach as it was in Phoenix City. In fact, Peggy found a community center that offered swimming lessons and immediately enrolled her children. The center offered discounted rates for groups. Once Peggy was aware of this opportunity, she gathered groups of children within her community—including hers and her sisters’—and paid for them to participate. She describes watching them swim as one of the happiest times of her life.

“I never told my children I couldn’t swim because I was so embarrassed by my fear. Now they’re able to do something that I was never able to do. Sitting back and watching the pure joy on their faces was so delightful for me. It’s important that parents take this seriously and instead of buying new toys or shoes for their children, purchase something that could change their lives for the better.”

Peggy never stopped yearning to swim. As a first step, she has committed to enrolling in a water aerobics course to prepare herself for more involved swimming lessons next. She became friends with a woman who has dedicated her life to teaching others how to swim. Peggy appreciates her friend’s patience, her passion, and that she looks like her—all qualities that make her feel comfortable trusting her with her fear when she’s ready to get in the water.

If she knew then what she knows now, Peggy says she would have advocated for more swimming courses in schools, more community centers with access to pools, and more resources to prioritize swimming as much as other sports.

Peggy reflects back on those fearful days in Phoenix City, vowing that she will no longer allow the terror she experienced to overcome her strength. A woman bounded by faith, she is confident that she will conquer her fear one day and join her children and grandchildren in the water with tranquility.

Check out our other stories!
Making Waves: The Dallis Family Story
From Fearful to Hopeful: How The Water is Fueling An Aspiring Swimmer's Purpose